Please note that when capturing outdoors, the cameras will have shorter tracking ranges compared to when tracking indoors. Also, the system calibration will be more susceptible to change in outdoor applications because there are environmental variables (e.g. sunlight, wind, etc.) that could alter the system setup. To ensure tracking accuracy, routinely re-calibrate the cameras throughout the capture session.

Even though it is possible to capture under influence of the sun, it is best to pick cloudy days for captures in order to obtain the best tracking results. The reasons include the following:

Increase the f-stop setting in the Prime cameras to decrease the aperture size of the lenses. The f-stop setting determines the amount of light that is let through the lenses, and increasing the f-stop value will decrease the overall brightness of the captured image allowing the system to better accommodate for sunlight interference. Furthermore, changing this allows camera exposures to be set to a higher value, which will be discussed in the later section. Note that f-stop can be adjusted only in PrimeX41, PrimeX22, Prime 41, and 17W camera models.

Even though it is possible to capture under sunlight, the best tracking result is achieved when the capture environment is best optimized for tracking. Whenever applicable, utilize shaded areas in order to minimize the interference by sunlight. 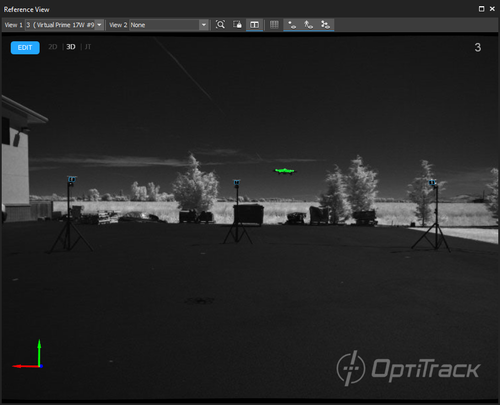 Increase the LED setting on the camera system to its maximum so that IR LED illuminates at its maximum strength. Strong IR illumination will allow the cameras to better differentiate the emitted IR reflections from ambient sunlight.

In general, increasing camera exposure makes the overall image brighter, but it also allows the IR LEDs to light up and remain at its maximum brightness for a longer period of time on each frame. This way, the IR illumination is stronger on the cameras, and the imager can more easily detect the marker reflections in the IR spectrum.

When used in combination with the increased f-stop on the lens, this adjustment will give a better distinction of IR reflections. Note that this setup applies only for outdoor applications, for indoor applications, the exposure setting is generally used to control overall brightness of the image.