This guide provides detailed instructions on commonly used functions of the Motive API for developing custom applications. For a full list of the functions, refer to the Motive API Function Reference page. Also, for a sample use case of the API functions, please check out the provided marker project. In this guide, the following topics will be covered:

When developing a Motive API project, make sure its linker knows where to find the required library files. This can be done either by specifying its location within the project or by copying this file to the project folder.

Motive API libraries (.lib and .dll) are located in the lib folder within the Motive install directory; which is located at C:\Program Files\OptiTrack\Motive\lib by default. In this folder, library files for both 64-bit (NPTrackingToolsx64.dll and NPTrackingToolsx64.lib) platforms can be found. The 32-bit library of NPTrackingTools has been deprecated starting from Motive version 2.1.

When using the API library, all of the required DLL files must be located in the executable directory. Copy and paste the NPTrackingToolsx64.dll file onto the folder alongside the executable file. 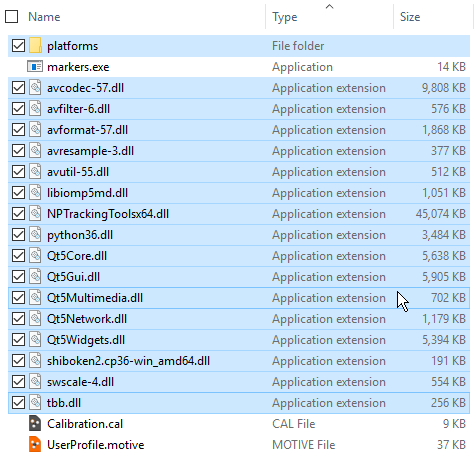 Note: You could define these directories by using the NPTRACKINGTOOLS_INC, NPTRACKINGTOOLS_LIB environment variables. Check the project properties (Visual Studio) of the provided marker project for a sample project configuration. 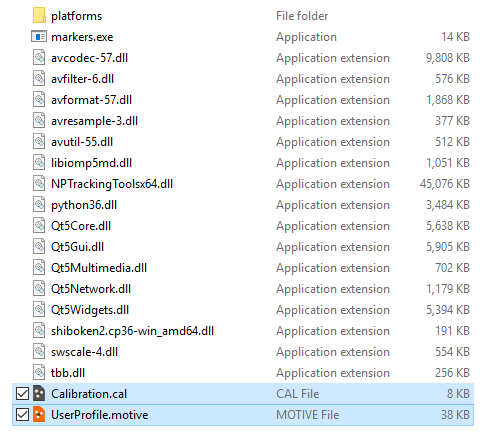 When using the API, connected devices and the Motive API library need to be properly initialized at the beginning of a program and closed down at the end. The following section covers Motive API functions for initializing and closing down devices.

To initialize all of the connected cameras, call the TT_Initialize function. This function initializes the API library and gets the cameras ready for capturing data, so always call this function at the beginning of a program. If you attempt to use the API functions without the initialization, you will get an error.

The TT_Update function is primarily used for updating captured frames, which will be covered later, but there is another use. The TT_Update can also be called to update a list of connected devices, and you can call this function after the initialization to make sure all of the newly connected devices are properly initialized in the beginning.

When exiting out of a program, make sure to call the TT_Shutdown function to completely release and close down all of the connected devices. Cameras may fail to shut down completely when this function is not called.

The Motive application profile (MOTIVE) stores all of trackable assets involved in a capture and software configurations including application settings and data streaming settings. When using the API, it is strongly recommended to first configure all of the settings and define trackable assets in Motive, export a profile MOTIVE file, and then load the file by calling the TT_LoadProfile function. This way, you can adjust the settings for your need in advance and apply them to your program without worrying about configuring individual settings.

Cameras must be calibrated in order to track markers in 3D space. You can calibrate the cameras in Motive and import the CAL file into the project, or you can also calibrate the system by calling a specific sequence of Motive API functions.

Starting from Motive 2.3, Motive API includes functions that allow users to calibrate the system directly using just the Motive API. Similar to the calibration process in Motive, users will need to initiate calibration wanding, check for wanding status, either apply or reset calibration results and then set the ground plane. The following pag includes a sample that demonstrates the use of Motive API functions for calibrating the camera system:

Connected cameras are accessible by index numbers. The camera indexes are assigned in the order the cameras are initialized. Most of the API functions for controlling cameras require an index value. When processing all of the cameras, use the TT_CameraCount function to obtain the total camera count and process each camera within a loop. For pointing to a specific camera, you can use the TT_CameraID or TT_CameraName functions to check and use the camera with given its index value. This section covers Motive API functions for checking and configuring camera frame rate, camera video type, camera exposure, pixel brightness threshold, and IR illumination intensity.

The following functions return integer values for the configured settings of a camera specified by its index number. Camera video type is returned as an integer value that represents a image processing mode, as listed in the NPVIDEOTYPE.

Now that we have covered functions for obtaining configured settings, now let's modify some of them. There are two main functions for adjusting the camera settings: TT_SetCameraSettings and TT_SetCameraFramerate. The TT_SetCameraSettings function configures video type, exposure, threshold, and intensity settings of a camera which is specified by its index number. The TT_SetCameraFrameRate is used for configuring frame rate of a camera. Supported frame rate range may vary for different camera models. Check the device specifications and apply the frame rates only within the supported range.

If you wish to keep part of the current camera settings, you can use the above functions to obtain the configured settings (e.g. TT_CameraVideoType, TT_CameraFrameRate, TT_CameraExposure, etc.) and them as input arguments for the TT_SetCameraSettings function. The following example demonstrates modifying frame rate and IR illumination intensity for all of the cameras, while keeping the other settings constant. 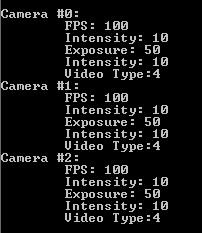 There are other camera settings, such as imager gain, that can be configured using the Motive API. Please refer to the Motive API Function Reference page for descriptions on other functions.

In order to process multiple consecutive frames, you must update the camera frames using the following API functions: TT_Update or TT_UpdateSingleFrame. Call one of the two functions repeatedly within a loop to process all of the incoming frames. In the 'marker sample', TT_Update function is called within a while loop as the frameCounter variable is incremented, as shown in the example below.

In general, a user should always use TT_Update(). Only in the case where a user wants to ensure their client application has access to every frame of tracking data and they are having problems calling TT_Update() in a timely fashion, should they consider using TT_UpdateSingleFrame(). If it is important for your program to obtain and process every single frame, use the TT_UpdateSingleFrame() function for updating the data.

After loading valid camera calibration, you can use the API functions to track retroreflective markers and get their 3D coordinates. The following section demonstrates using the API functions for obtaining the 3D coordinates. Since marker data is obtained for each frame, always call the TT_Update, or the TT_UpdateSingleFrame, function each time newly captured frames are received.

In a given frame, each reconstructed marker is assigned a marker index number. These marker indexes are used for pointing to a particular reconstruction within a frame. You can also use the TT_FrameMarkerCount function to obtain the total marker count and use this value within a loop to process all of the reconstructed markers. Marker index values may vary between different frames, but unique identifiers will always remain the same. Use the TT_FrameMarkerLabel function to obtain the individual marker labels if you wish to access same reconstructions for multiple frames.

For obtaining 3D position of a reconstructed marker, you can use TT_FrameMarkerX, TT_FrameMarkerY, and TT_FrameMarkerZ functions. These functions return 3D coordinates (X/Y/Z) of a marker in respect to the global coordinate system, which was defined during the calibration process. You can further analyze 3D movements directly from the reconstructed 3D marker positions, or you can create a rigid body asset from a set of tracked reconstructions for 6 Degree of Freedom tracking data. Rigid body tracking via the API will be explained in the later section.

For tracking 6 degrees of freedom (DoF) movement of a rigid body, a corresponding rigid body (RB) asset must be defined. A RB asset is created from a set of reflective markers attached to a rigid object which is assumed to be undeformable. There are two main approaches for obtaining RB assets when using Motive API; you can either import existing rigid body data or you can define new rigid bodies using the TT_CreateRigidBody function. Once RB assets are defined in the project, rigid body tracking functions can be used to obtain the 6 DoF tracking data. This section covers sample instructions for tracking rigid bodies using the Motive API.

Let's go through importing RB assets into a client application using the API. In Motive, rigid body assets can be created from three or more reconstructed markers, and all of the created assets can be exported out into either application profile (MOTIVE) or a Motive rigid body file (TRA). Each rigid body asset saves marker arrangements when it was first created. As long as the marker locations remain the same, you can use saved asset definitions for tracking respective objects.

Exporting all RB assets from Motive:

When using the API, you can load exported assets by calling the TT_LoadProfile function for application profiles and the TT_LoadRigidBodies or TT_AddRigidBodes function for TRA files. When importing TRA files, the TT_LoadRigidBodies function will entirely replace the existing rigid bodies with the list of assets from the loaded TRA file. On the other hand, TT_AddRigidBodes will add the loaded assets onto the existing list while keeping the existing assets. Once rigid body assets are imported into the application, the API functions can be used to configure and access the rigid body assets.

6 DoF rigid body tracking data can be obtained using the TT_RigidBodyLocation function. Using this function, you can save 3D position and orientation of a rigid body into declared variables. The saved position values indicate location of the rigid body pivot point, and they are represented in respect to the global coordinate axis. The Orientation is saved in both Euler and Quaternion orientation representations.

Once the API has been successfully initialized, data streaming can be enabled, or disabled, by calling either the TT_StreamNP, TT_StreamTrackd, or TT_StreamVRPN function. The TT_StreamNP function enables/disables data streaming via the NatNet. The NatNet SDK is a client/server networking SDK designed for sending and receiving NaturalPoint data across networks, and tracking data from the API can be streamed to client applications from various platforms via the NatNet protocol. Once the data streaming is enabled, connect the NatNet client application to the server IP address to start receiving the data.

The TT_StreamNP function is equivalent to Broadcast Frame Data from the Data Streaming pane in Motive.

The Motive API does not currently support configuring data streaming settings directly from the API. To configure the streaming server IP address and the data streaming settings, you will need to use Motive and save an application profile MOTIVE file that contains the desired configuration. Then, the exported profile can be loaded when using the API. Through this way, you will be able to set the interface IP address and decide which data to be streamed over the network.